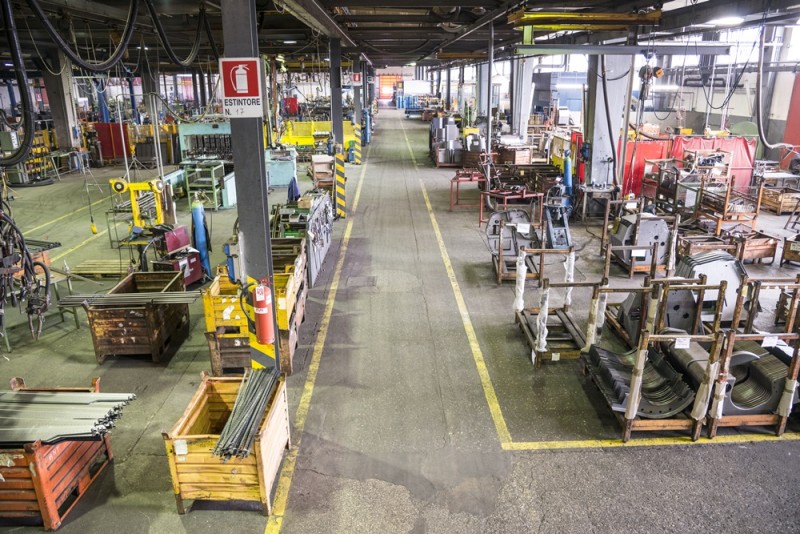 We can quite easily compute the optimal amount of WIP for each production. At the same time the WIP in use notifies the performance of our production when compared to the optimal, worst-case and practical worst-case.

Before going any deeper we must look over the terms used in this article.

TH
Throughput (TH) means the production that comes out of the line. Usually products/hour.

WIP
Work in Process illustrates the parts in production line.

rb
Bottleneck speed (rb) is in parts/time -unit and it is the workstation that has the worst throughput in the long run. It is the mean value after all outages.

Utilization
Utilization is the work load on workstation. It is calculated from the formula incoming parts per hour / capacity per hour.

Critical WIP, W0
Critical WIP (W0) illustrates the amount of WIP that is needed to have the maximal throughput in stabilized environment with no variability. W0 = rb * T0.

Think about simple production line with two workstations. 1. station needs 1 minute and second 2 minutes to do its job. rb  for the first station is 1 and for the second staion 0,5 (0,5 products per hour).

Lets take an example of production line with 4 workstation and 2 hours process time each.

Our line is perfect line where is no loss and it works 24 hours every day.

Rate for each station is r = 0,5 products per hour or one product per 2 hours. Because there is no loss all the stations work with same utilization and bottleneck rate rb = 0,5.

Line is called balanced line because all the stations have same capacity. Raw process time T0 is simple the sum of process times on each station.

This means that at all times we have 1 product on each workstation. We can increase the WIP but it does not increase the throughput because every station can do only 0,5 units per hour. Added WIP is added to the queue in front of the first station and they increases the cycle time CT.

For the second example we have unbalanced line where process times are different and each operation has different amount of machines. 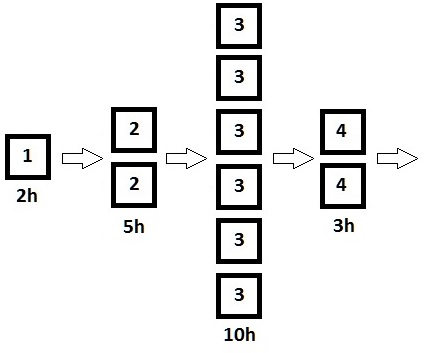 TH for the whole production line can still be computed from the bottleneck rate or from the slowest machine. In this case it is the 2. operation and bottleneck rate rb = 0,4 products per hour.

In unbalanced line W0 is typically less than the amount of machines/workstations. It illustrates the WIP level where maximum production is achieved. However critical WIP applies only in production line with no variability and is therefore almost never the optimal situation.

This Little’s law illustrates the amount of WIP and is applicable in all situations.

Formula is applicable also for the single workstation and from the second example we can compute this:

From the Little’s law we can lead formula for the best production time possible. In this case w is for the WIP-level in use.

And the worst possible case is:

Worst case can happen if production from the workstation is moved in batches. In best case scenarion products are immediately moved from workstation to another and there is no interim storage.

In reality the worst case is seldom the case. On the other hand best case is almost impossible to achieve. That’s why we will now compute the practical worse case scenario that can be used as an reference to compare the reality in your production.

PWC formulas forms an reasonable mean value that indicates many implementations in reality.

Bottleneck rate rb is crucial because it defines the TH for the whole production.

If production performs better than PWC we can find it to be quit good. Otherwise there will be something to improve. From the formulas we can find what should be improved. Example when increasing the bottleneck rate our cycle time will decrease. But this is not always financially reasonable if we would have to buy second machine etc.

Workers as an bottleneck?

In this case we can compute our production from the formula THmax = n/T0, where n is the amount of workers and T0 is still the raw process time.

Formula is not applicable if workers can do multiple operations in the same time. Example monitor multiple CNC machines. Formula is applicable only if one worker does one job at a time.

TH in the formula implies the best production possible. It seldom is reality because of the different queuing times etc. Example some operation are allowed or skilled to do only part of the workers.